Hem Artiklar After the scandal: It is time to end the gay network 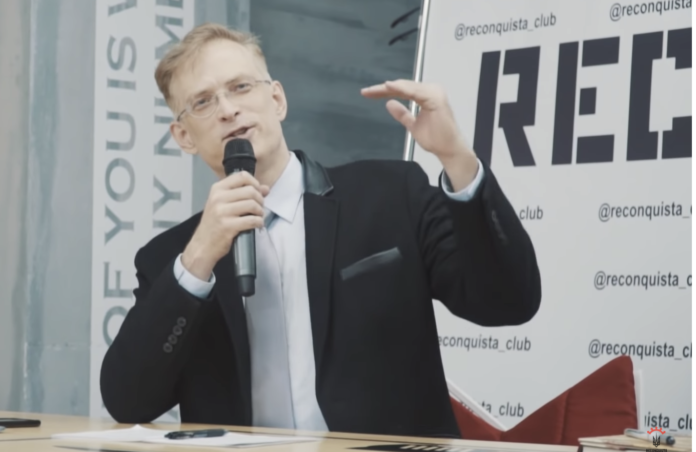 It has now been revealed what we have known for years. One segment of the US alt-right scene, influenced by the publishing house Counter-Currents, is dominated by homosexuals. They are organized in a global network and various political events have been used as a recruitment platform where young men have been subjected to attempts to initiate sexual relations with older men. People like Greg Johnson have taken advantage of their authority to persuade these victims to remain silent about what they have suffered.

[Read the same article in Swedish]

[Network of homosexuals exposed in the Alt-Right! [with recordings]]

[Open letter to other organisations: An appeal for a moral order]

It has continuously been reported that homosexual grooming is taking place on “white-nationalist” events in the United States, several articles have been published on the subject. Greg Johnson and others have actively and openly propagated for an amoral view of sexuality and homosexuality in particular – a “white liberalism”. Counter-Currents has over the years released several books that normalize homosexuality. It is not just Greg but a large group of people who are both open and concealed gays. That Greg has personally been gay is well known, though until now he has not confirmed it publicly. No one can claim ignorance. Few have protested.

An ideology and a network in one

The ideological position is crystal clear. In Jack Donovan’s ”Androfilia”, the author claims that the men who love men should become priests in a cult of masculinity. “Strip it down to its raw essence — a man’s sexual desire for men — and reimagine the destiny of that man. Reimagine what this desire focused on masculinity could mean, what it could inspire, and who the men who experience it could become.” James O’Meara, who has, among other things, written the book ”The Homo and the Negro: Masculinist Meditations on Politics and Popular Culture” published on Counter-Currents and with Greg as editor has touched on similar thoughts. Facing criticism of the gay agenda this O’Meara has replied “why don’t you just F*** off and kill yourself? That way we won’t have to take care of you when the actual Revolution occurs.”

Greg argued already in 2002 for a positive view on homosexuality and a pederast behavior: “intolerance of homosexuality is Jewish…Homosexual pederasty, which still remains a taboo in our culture, was widely practiced by the ancient Aryan peoples…Technically, the Greeks and others were not pedophiles, who pursue children, for they focused their attention on young men…there is no question that homosexual behavior was not only tolerated by ancient Aryan peoples, it was considered normal, in some cases even ideal…It is hard to maintain hateful Jewish attitudes toward homosexuality if one really understands and appreciates the greatness of classical pagan civilization.”

The network is present in Sweden

It’s time to come out in the light. We know that there are people in Sweden who are part of the secret facebook group, which according to Greg consists of bisexual and gay men. Many others, such as Fróði Midjord, the Scandza Forum main organiser, have helped to launch Greg and peoples such as the openly bi-sexual Millennial Woes in our country, but hopefully with other motives. Perhaps they have not really understood the gravity of the question, perhaps they have thought of it as more convenient to propose a general hedonism instead of “moralism” or perhaps they appreciated a purely aesthetic view of politics. This is naive at best. But the time of excuses is over – Liberalism must be forced out.

Curiously, radical elements in Eastern Europe have been involved in launching Greg. Perhaps a little brother complex has taken over when an eloquent American, doctor and so on has offered to lecture for them, I don’t know the reason. These Eastern Europeans are by no means advocates of a homosexual lifestyle but their actions have in this case taken that direction. I expect it not to be repeated, everyone are now informed, and to continue to offer a platform (without clearly declaring the purpose and starting point of the lecturer) means an open defence of the homosexual network and an acceptance that political arenas are used for the grooming of young men or boys.

The responsibility is ours

You and I have a personal responsibility for whether this continues, and we have this responsibility if we defend, trivialize or if we are part of letting this continue and contribute to normalize it. Risk environments must be minimized, people who use their position for sexual exploits must be exposed. Everything else would be unacceptable.

I am glad to take on a debate on this issue or publish a reply in this magazine, for this question has to be sorted out at its root. Once and for all.